Similar to many successful manufacturers, Kennebec Technologies began in a garage. After more than 40 years and with more than 65 employees working there, Kennebec has become a world-class parts manufacturer that specializes in complex, high-precision components for aerospace, defense, alternative energy, medical, semiconductor and telecom applications.

The Augusta, Maine-based company’s QC process is set in motion at the beginning of every job and remains a focus throughout production. Engineers map every checkpoint in the production process at which inspectors ensure that a machined part complies with all requirements, standards and expectations. With the help of four coordinate measuring machines, including an inline CMM on the production floor, Kennebec performs first-article and final inspections.

However, Kennebec’s vision for a lean quality-inspection process includes inline and lab inspection with newer, faster CMMs and a focus on fundamentally improving how parts are fixtured. Keeping spindles running and making good parts is the goal of any manufacturer and is what drives Kennebec to eliminate its QC bottleneck.

According the company, the ideal inspection process includes a CMM for every high-production work cell and CMMs for the metrology lab, all complemented by dedicated, quick-change fixtures. Faster, easier setups will increase the number of employees who can inspect components, helping to increase spindle uptime.

The evolution toward in-process inspection was initiated by a high-volume, high-profile defense customer requesting that Kennebec measure production parts and submit statistical data for review vs. source inspections of parts from work cells. 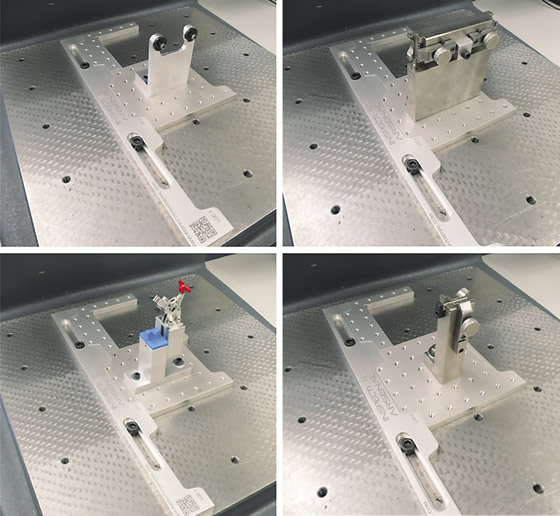 A setup on a Carl Zeiss Duramax CMM using an 18″ (457.2mm) Inspection Arsenal Loc-N-Load docking rail. A number of quick-change fixtures are secured on the docking rail and then released as needed. Image courtesy Phillips Precision.

The inline CMM also runs Prolink data collection software. This provides machinists real-time feedback on product conformance, process capability and trending to enable proactive process adjustments in the cell and prevent defects and production delays. The measurement data and analysis can be sent to customers to eliminate the need for on-site source inspections. The company has experienced a 1-year payback on its work cell CMM through the reduction of bad parts and the elimination of on-site source inspections.

Harvey Smith, vice president of operations, said he was pleased that a fixture system existed to complete Kennebec’s in-process inspection evolution. “We were looking for a quick-change fixture system for our CMMs and believe that the Loc-N-Load plate system is just that. We are always focused on lean activities and, as we expand our use of CMMs on our shop floor, this solution will be instrumental in our having a ‘self-serve’ inspection process.”

The inspection staff includes a CMM programmer and two CMM operators. With more than 70 different part styles inspected per day, the ratio of inspectors and CMMs to production staff and CNC machine tools, although not uncommon, makes it impossible for QC to keep pace using traditional inspection techniques.

The Inspection Arsenal Loc-N-Load fixture system’s two main components easily adapt to a CMM, according to Phillips Precision. A docking rail installs outside the work area of the probe while five sizes of magnetically interlocking fixture plates are secured and released, creating repeatable setups for many of Kennebec’s parts. Trigger-action, non-marring clamps and various other workholding components complete the system.

With the system, multiple fixtures can be set up on a CMM and swapped for fast access to the table when necessary, with little interruption. Fixtures can be moved from one CMM to another while maintaining accuracy. By dedicating quick-change fixtures for simple, repeatable and documented steps, inspection work can be standardized.

“We have designed several holders, which are attached to the Loc-N-Load plates,” said Trevy Bump, quality supervisor for Kennebec. “The quick-swap plates significantly reduce first-piece inspection time by eliminating the need to build and disassemble multiple setups, which help us get into production faster.”

As part of its lean focus, Kennebec made this fixture system the standard, thereby reducing fixture and training costs and allowing production personnel to inspect parts.

In order of priority, CMM programmers have designed 10 dedicated Loc-N-Load fixtures for some of their most complex parts. Bump roughly calculated a savings of nearly $40,000 in 2014 for the first seven of the 10 parts converted to Loc-N-Load plates. “We are saving several minutes of inspection time each on these 5,500 pieces, which require 100 percent inspection. At our shop rate, the plate is paid for in little more than an hour.”

All of the CMMs in the metrology lab accept Loc-N-Load fixture plates, allowing inspectors to move seamlessly between CMMs. Bump projects more than $100,000 in savings this year as more parts are checked with the fixture plates.

“The availability of a modular system like this creates process improvement opportunities where they didn’t exist previously,” Bump said. “We can now move faster to a lean QC work flow by fixturing our most common parts and create redundancy across our inspection equipment.”

CUTTING TOOL ENGINEERING Magazine is protected under U.S. and international copyright laws. Before reproducing anything from this Web site, call the Copyright Clearance Center Inc. at (978) 750-8400.